Welcome Back to All Saints! 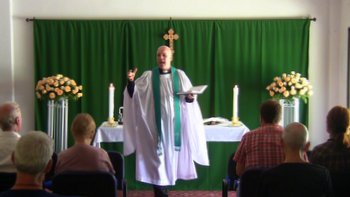 I am still in England, but Andy and I will be back on Sunday, ready for a new year!  Welcome back also to all those who have been away over the summer – we hope to see you worshipping with us soon!

Sometimes I wish I could travel business class!  It must be nice to be rich, famous, and powerful.  The grass always looks greener – not just on the other side of the fence – but in the fields which are higher up!  However, in this week’s Old Testament reading we have the story of David and Bathsheba.  As I have said in some recent sermons, power corrupts, and absolute power corrupts absolutely.  Perhaps being rich and famous is not so good after all.  We will look at the life of David – warts and all – this Sunday.

All are welcome to join us as we share the presence of the risen Jesus in our lives!  We hope to see you soon and that you will enjoy worshiping with us, 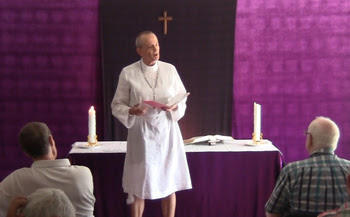 Elena Kelly will be preaching this week!

Greetings from “sunny” England.  I shall be away for the next two Sundays, but worship will continue at All Saints!  Elena will be preaching and Father Ian will celebrate communion!  Please contact Elena on 0932 916 590 in the event of any emergency!

Meanwhile, be prepared to rethink everything – the theme of Elena’s sermon this Sunday.  This week our readings will be 2 Samuel 7:1-14, Ephesians 2:11-22, and Mark 6:30-34, 53-56, and we will be singing the hymns Alleluia Sing to Jesus, Let us Build a House, Break thou the Bread of Life, and All for Jesus.  The readings can be found via this link!

All are welcome to join us as we share the presence of the risen Jesus in our lives!  We hope to see you soon and that you will enjoy worshiping with us,

I don’t Care what they Say! 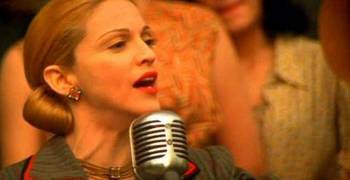 Evita!  “I don’t care what the bourgeoisie say.”

In 1979 the musical Evita took the London West End by storm.  In 1996 it was made into a film starring Madonna.  Eva Peron was a young actress whose liaison with an Argentinian general allowed her to propel him to power in a mixture of popular uprising and military coup.  One of the lines given to Evita is “I don’t care what the bourgeoisie say.”  Her power base comprised the workers, to her the views of the small middle-class was irrelevant.

In the same way, in this week’s Old Testament Reading we see King David dancing before the Lord and scandalizing his wife and many of the other well-to-do people.  He was only concerned with praising God and was unconcerned about the reaction of proper society.
Our Gospel reading tells of one with a similar disregard for pleasing people, but with a rather more serious outcome:  John the Baptist denounced those in power, and lost his head for his troubles!  What about us?  Do we care what “they” say?  That will be the theme of this Sunday’s sermon.

Cool Summer at All Saints! 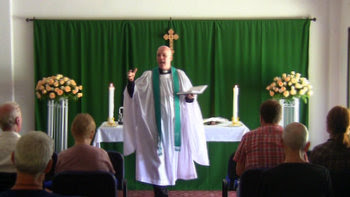 .
I have two more Sundays at All Saints before Andy and I fly off to England.  Meanwhile we are all enjoying the cool summer here in Chiang Mai – while England basks in temperatures of more than 35 degrees Celsius!  (It may be hotter here, but at least we have air-conditioning!)  However, hot or cold, our joy in worshipping God together continues.  He is the one who sends the sun to shine and the rain to fall on the good and the bad alike.  We have much to praise God for!

This week our readings will be 2 Samuel 5:1-5, 9-10, 2 Corinthians 12:2-10, and Mark 6:1-13, and we will be singing the hymns Christ whose Glory fills the Skies, In Christ alone my Hope is Found, Let us break bread together, and For All the Saints.  The readings can be found via this link!  Our sermon will be entitled What it is to be popular!

Most people get to hear about us via the internet or by word of mouth, so please feel free to pass on this email to others.  All are welcome to join us as we share the presence of the risen Jesus in our lives!  We hope to see you soon and that you will enjoy worshiping with us,